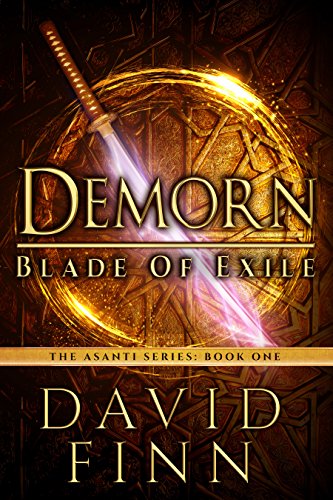 Before I started to read the book, I read the little blurb and was excited about it; because I love fantasy and it promised that. I got to talking with David Finn on twitter about the book and he gifted me with it for an honest review. Little did I know that I was being given a gem beyond what I had already praised and hoped it would be. I love it when books are even better than I thought, it makes me ecstatic. It also makes me gush about it like it is the most important thing for everyone else to read. So please read it people, PLEASE! You will have no regrets!!

Once I started reading the book I was sucked into the multiple worlds and realities that Demorn goes in and out of. I found that it was fascinating and mind-blowing how the worlds and realities were interwoven so well. The past, present and future was woven into the story every step of the way making everything complex and I was on the edge of my seat the whole time I read Demorn: Blade of Exile. I LOVED IT. The detail was so great that I felt like I was right there along with Demorn, like a movie was playing within my head while reading. (Hint, Hint David Finn!! I want a movie!! Pretty, pretty please!!!)

I want to say to all the writers/authors out there that I absolutely love mythology in books and David did a fabulous job on having Greek Mythology in the book. You should take a page from David Finn’s book on how to have mythology in a book and make it seem like it is something new, unknown and exciting. I feel like my inner mythology nerd was happily clapping and dancing while I was reading. Making me want to gush about the book like a schoolgirl that I no longer am but still have inside me.

I feel like my inner nerd is so happy that I will probably continue to gush about this book just because it is bad ass and because I can. I love all the characters in the book, they are all completely original and different which is a huge deal. I cannot stand when characters in a book are so alike that I want to smack the author a little bit, ( that won’t be happening David, I don’t want to smack you at all, I promise). I feel like Demorn was my favorite character but not because she was the main heroine, but because she was Ms.Sassypants and I didn’t know what she would say or do next, making each thing she did or said awesome every single time.

I also really like Toxis because she was blunt and serious about things but was extremely loyal and I really really respect that. You can’t have a good huntress and companion if they are not loyal and kickass like Toxis. Although Demorn is kickass all by herself, but that is besides the point. I like The Last as well she was adorable and spunky all on her own and I enjoyed whenever she would pop up throughout the story. Also, I thoroughly enjoyed Sinatra being in the story because who doesn’t love the guy?! Seriously, who thinks of putting someone so spectacular like Sinatra in their book? Someone who has genius tendencies, like David Finn over here. Wrecking was also pretty awesome for a character, I like how he was mentioned here and there and then was there until the end of the book. Oh, and Smile was pretty cool as well, he was cute and a little smarty. He was like an opposite of Demorn but not at the same time if that makes sense. Just read it, then you will know what I am talking about.

I am still curious about what happened to Smile, you know with the computers and all. I don’t want to give too much away but David tell me what happened there? Oh and I want to know about Kate too. She was a really good, mysterious character that was around a lot and made me curious. I am curious about so many things from the ending at the book. What happens with Wrecking, Demorn, Alex, Dog, Kate, Toxis, Smile, Sinatra and the red lady? Or Jason and the cub? Where do they go from there? How do they get there, what will they do? I obviously have more questions but those won’t be answered until I open the next book.

It is always said that a good book is written when the reader wants more and has so many questions unanswered and is willing to wait for the next book to figure out the answers. I could gush and go on and on about how this book is but no one will know how they feel about it until they read it. This is the time for me to suggest that everyone does read it because it is one of the best and I would say a classic for the fantasy genre. It is most certainly going on my favorite shelf on my kindle app. Not very many books get onto my favorite shelf so that is saying something. Read it, because it will be one of the best books you can read. It is very engaging. I can’t wait to read the next one, luckily I already have that one too, thanks to David.

I want to thank the author of this mind-blowing, inspiring book for giving me the chance to get it as a gift in exchange for an honest review. I honestly think I got more out of it than he did, so thank you David. I also want to thank Kim at Deranged Doctor Design for the cover designs because I am one of the readers that looks at the cover in hopes that it will match the treasure inside and it did. So thank you for making the cover look so intriguing so that I read about the blurb that got it all started. Thank you guys. Also a thanks to those who read this review to learn about this cool book through my cheerleading for it. I was never a cheerleader but I will happily be one for a good book.

I really hope this review helps and encourages others to read this book because if you don’t that would be a tragedy and your loss. I will be writing a review for the next book in the series because I got that one as a gift for a review as well. I am hoping to do it soon because I am excited to go back into the worlds of Demorn and my fingers seem to be twitching from anticipation. I think anyone in their right mind ( or left ha ha) would read this. For goodness sake, do it already. The secrets in the book lie in waiting, whispering to those wanting and worthy to listen. Are you worthy?