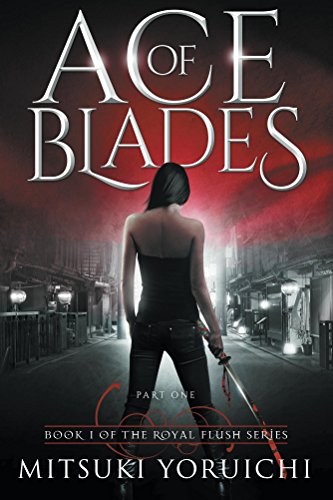 The book started off a little slower than I liked and I at first didn’t know if I would be able to finish it, but I kept going because I just KNEW it was going to be good. I was absolutely right. Once I got past the part of her regular days as a art installer, the mysterious playing cards came along with the weird phone calls.

After that it was like a domino effect, more and more things were happening and before you knew it she was in the middle of constant action keeping you at the edge of your seat. The mystery of it all is so intriguing I wanted to keep pulling on the thread until everything unraveled before me and I knew everything. I devoured the book because I wanted to figure out the riddles before Ace did. It was like I was being drawn in by a predator except for I totally wanted this to happen and I willing went towards said lion. The lure of trying to figure out what the pasts were of both Rei and Ki was also another pull for me like a magnet. Reading this book and finishing it was inevitable.

Some of the events that happened in this were definitely shocking to put lightly but I thoroughly enjoyed them. I think anyone would be foolish to turn away from a book such as this one when it was crafted with such originality. Plus the Japanese and American cultures shown in here are just spectacular. The ending left me like “but what about…..?” Then I remembered that I had part 2 in a email and then I didn’t fuss as much but still it will make you do the same. You’ll just want more and won’t know what to do with yourself until you can get your next helping. Well my advice is to read the intercept of part 2 a couple of times and somehow get ahold of the author because otherwise you, my friend, have a bit to wait for part 2.

8 thoughts on “Ace of Blades: Part One (Royal Flush Book 1) By Mitsuki Yoruichi”