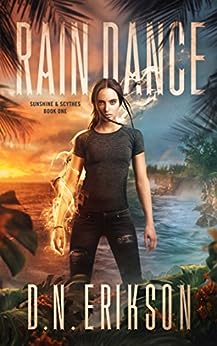 You Like The Idea Of Her, But Rip Away The Skin…

I was really excited to read this book because it is so different from other books I have read about reapers. First of all, she is a reaper for a vampire warlord on a hidden island instead of a reaper for death like every other book out there. So I wanted to know why she was a reaper for him instead and what made HER, so special. Ya know?

So that was the first thing that made me want to read it, but then apparently she was dead before and lived another life, then was turned into a reaper. Someone from her life before she was a reaper shows up in her bushes on her property… DEAD.

Now the FBI think she is the murderer. Is she? I had to know.

Once I started reading Rain Dance, the action started right away! Eden was collecting souls and then all of the sudden someone was trying to kill her. I am happy to say that the rest of the book is like that, with many, many twists. These twists were very clever too, I might add. There were some impressive parts to this book. I loved it.

There was a lot of commotion going on and many things are revealed and I really enjoyed them. It was very creative and imaginative. I really loved and adored how different and kickass this book was.

One of the things that was awesome was the talking cat. YES! You really did just read that and his name is Kahn and he is such sassy fun. He made me laugh with his, “stupid humans” comments here and there. PRICELESS. He’s a smarty too. He makes the book that much better. Ugh I just love that little guy ! ❤

I loved how sassy and rebellious Eden is in this book. She really needed to be on her toes with all the disasters going on around her and she was. The poor thing didn’t know who she could trust, but that didn’t stop her. She had a lot of depth that showed piece by piece throughout the book. It showed that she wasn’t a heartless reaper. Although, there is more to her than just what was shown. I know there is and I want it all.

Same with the other characters. There was a great amount of detail given, but there is still vital information needed about each character that adds to the story. It also adds to who they are as a character and this story was particularly was missing that so it lost a star.

I am hoping that these details will be revealed in the second book, Heat Wave (Sunshine & Scythes Book 2). I can’t wait to get my hands on it! It comes out February 1, so we have a bit to wait. I think anyone who doesn’t pick this book up would sadly miss out on an incredible view of reapers and the supernatural world. So don’t be one of THOSE PEOPLE.